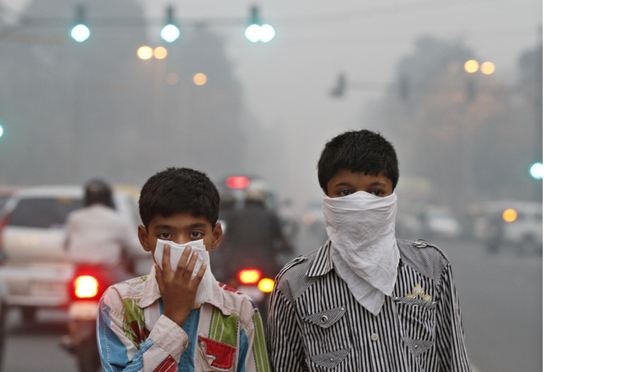 Atmospheric particulate matter – also known as particulate matter (PM) or particulates – is microscopic solid or liquid matter suspended in the Earth’s atmosphere. The term aerosol commonly refers to the particulate/air mixture, as opposed to the particulate matter alone.[3] Sources of particulate matter can be man-made or natural. They have impacts on climate and precipitation that adversely affect human health. Subtypes of atmospheric particle matter include suspended particulate matter (SPM), respirable suspended particle (RSP; particles with diameter of 10 micrometres or less), fine particles (diameter of 2.5 micrometres or less), ultrafine particles, and soot.The IARC and WHO designate airborne particulates a Group 1 carcinogen. Particulates are the deadliest form of air pollution due to their ability to penetrate deep into the lungs and blood streams unfiltered, causing permanent DNA mutations, heart attacks, and premature death. In 2013, a study involving 312,944 people in nine European countries revealed that there was no safe level of particulates and that for every increase of 10 μg/m3 in PM10, the lung cancer rate rose 22%. The smaller PM2.5 were particularly deadly, with a 36% increase in lung cancer per 10 μg/m3 as it can penetrate deeper into the lungs.

Particles can come in almost any shape or size, and can be solid particles or liquid droplets. We divide particles into two major groups. These groups differ in many ways. One of the differences is size, we call the bigger particles PM10 and we call the smaller particles PM2.5.

When you inhale, you breathe in air along with any particles that are in the air. The air and the particles travel into your respiratory system (your lungs and airway). Along the way the particles can stick to the sides of the airway or travel deeper into the lungs.

This site uses Akismet to reduce spam. Learn how your comment data is processed.

air pollutionAir purifiers
By ME SHOP INDIAJuly 6, 2015Air purifiersComment on what are pm 2.5 and PM10 particulate matters?

Hi, My name is Abhinandan Kamboj, I welcome you all to my blog website.

what are pm 2.5 and PM10 particulate matters?
WhatsApp us
Go to mobile version
%d bloggers like this: