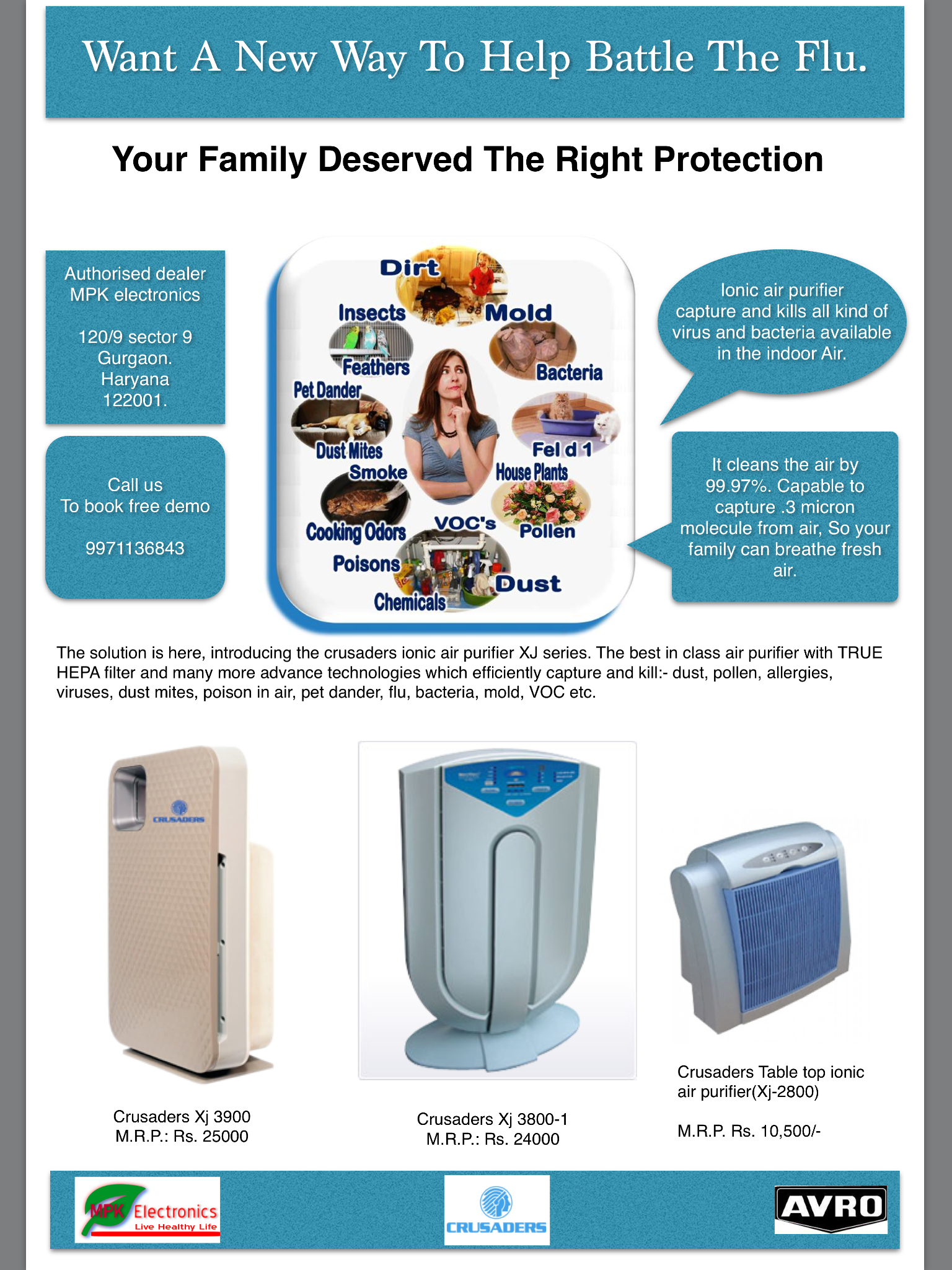 last time we have check some of the best air purifiers based upon CADR.

An air purifier is a device which removes contaminants from the air in a room. These devices are commonly marketed as being beneficial to allergy sufferers and asthmatics, and at reducing or eliminating second-hand tobacco smoke. The commercially graded air purifiers are manufactured as either small stand-alone units or larger units that can be affixed to an air handler unit (AHU) or to an HVAC unit found in the medical, industrial, and commercial industries. Air purifiers may also be used in industry to remove impurities such as CO2 from air before processing. Pressure swing adsorbers or other adsorption techniques are typically used for this.

3. Activated carbon filter: Activated carbon is a porous material that can adsorb volatile chemicals on a molecular basis, but does not remove larger particles. The adsorption process when using activated carbon must reach equilibrium thus it may be difficult to completely remove contaminants.[6] Activated carbon is merely a process of changing contaminants from a gaseous phase to a solid phase, when aggravated or disturbed contaminants can be regenerated in indoor air sources.[7] Activated carbon can be used at room temperature and has a long history of commercial use. It is normally used in conjunction with other filter technology, especially with HEPA. Other materials can also absorb chemicals, but at higher cost.

4. HEPA FILTER:- it captures up to .3 micron particulate matters with 99.97% efficiency. Ultra HEPA filters capture .1 micron particulate matters with 99.97% efficiency. The main filter in every purifier. It’s capable in capturing almost all air Bornes it captures pet denders, MOLD, fine smoke, fine dust, mesh, any redioactive molecule in air. HEPA IS high efficient particulate absorber made for the same purpose by NASA. HEPA is recommend by NASA. An air purifier WITHOUT HEPA  Airpurifier IS OF NO USE.

5. Tio2 titanium coated photo catalyst filter:- Photocatalytic oxidation systems are able to completely oxidize and degrade organic contaminants. For example, Volatile Organic Compounds found low concentrations within a few hundred ppmv or less are the most likely to be completely oxidized.(PCO) uses short-wave ultraviolet light (UVC), commonly used for sterilization, to energize the catalyst (usually titanium dioxide (TiO2)and oxidize bacteria and viruses. PCO in-duct units can be mounted to an existing forced-air HVAC system. PCO is not a filtering technology, as it does not trap or remove particles. It is sometimes coupled with other filtering technologies for air purification. UV sterilization bulbs must be replaced about once a year; manufacturers may require periodic replacement as a condition of warranty.

6. UV BULBS:-UV can be used to sterilize air that passes UV lamps via forced air. Air purification UV systems can be freestanding units with shielded UV lamps that use a fan to force air past the UV light. Other systems are installed in forced air systems so that the circulation for the premises moves micro-organisms past the lamps. Key to this form of sterilization is placement of the UV lamps and a good filtration system to remove the dead micro-organisms. For example, forced air systems by design impede line-of-sight, thus creating areas of the environment that will be shaded from the UV light. However, a UV lamp placed at the coils and drainpan of cooling system will keep micro-organisms from forming in these naturally damp places. The most effective method for treating the air rather than the coils is in-line duct systems, these systems are placed in the center of the duct and parallel to the air flow.

7. Negative ions:-Ionizer purifiers use charged electrical surfaces or needles to generate electrically charged air or gas ions. These ions attach to airborne particles which are then electrostatically attracted to a charged collector plate. This mechanism produces trace amounts of ozone and other oxidants as by-products. Most ionizers produce less than 0.05 ppm of ozone, an industrial safety standard. There are two major subdivisions: the fanless ionizer and fan-based ionizer. Fanless ionizers are noiseless and use little power, but are less efficient at air purification. Fan-based ionizers clean and distribute air much faster. Permanently mounted home and industrial ionizer purifiers are called electrostatic precipitators

8. Ozone:-Ozone generators are designed to produce ozone, and are sometimes sold as whole house air cleaners. Unlike ionizers, ozone generators are intended to produce significant amounts of ozone, a strong oxidant gas which can oxidize many other chemicals. The only safe use of ozone generators is in unoccupied rooms, utilising “shock treatment” commercial ozone generators that produce over 3000 mg of ozone per hour. Restoration contractors use these types of ozone generators to remove smoke odors after fire damage, musty smells after flooding, mold (including toxic molds), and the stench caused by decaying flesh which cannot be removed by bleach or anything else except for ozone. However, it is not healthy to breathe ozone gas, and one should use extreme caution when buying a room air purifier that also produces ozone.

This site uses Akismet to reduce spam. Learn how your comment data is processed.

By ME SHOP INDIAJuly 6, 2015Air purifiersComment on Best air purification  technologies in india.

Hi, My name is Abhinandan Kamboj, I welcome you all to my blog website.